You are at:Home»All News»THE RISE OF GLUTEN-FREE INGREDIENTS
September 24, 2021 All News 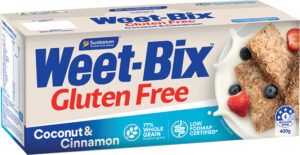 Sanitarium products have been a pantry staple since 1901 and the company has long been ahead of the game in terms of listening to consumers dietary concerns.

That’s why in 2014 the company established a completely gluten-free factory to keep up with demand. So, what can other manufacturers learn from this industry leader about allergen control? NZ Food Technology News spoke with Sanitarium’s quality system manager Nerolie Dever to find out.

“This involved shutting down the plant and extensively cleaning the place would be putting it mildly,” says Dever.

“Everything got cleaned within an inch of its life, dismantled and pulled apart. It underwent extensive testing and a whole heap of work.”

For food to be labelled as gluten-free in Australia and New Zealand, there must be no detectable gluten, nor oats or their products, nor cereals containing gluten that may have been malted, or their products.

Often a limit of less than three parts per million (<3ppm) is referred to as the accepted limit in New Zealand and Australia. This can be taken to be the ‘middle ground’ for the LOD and LOQ of the above testing kit. However, current legislation does not refer to any quantifiable limit, only what is stated in Standard 1.2.7.

This differs from The Codex Alimentarius which is a collection of standards for food safety developed by the Food and Agriculture Organisation and the World Health Organisation. This standard defines limit values for gluten and states a product may only be labelled as gluten-free if it contains no more than 20 mg/kg gluten. Products containing less than 100 mg/kg gluten however may be labelled as ‘low gluten’.

Dever says Sanitarium’s decision to dedicate an entire factory to gluten-free products was to ensure from a consumer’s point of view there was no risk of potential cross-contamination.

This ties in with the company’s philosophy that having gluten-free systems in place is much more important than passing a test designed to measure gluten content.

One of the challenges she says that companies can face when making gluten-free products is making sure there is no cross-contamination at the agricultural level.

“With a lot of agricultural products, you have the potential for agricultural co-mingling, so getting raw materials that we can guarantee are gluten-free is important.

“We work extensively with our suppliers to ensure they have robust processes in place from the harvesting, storing, transporting to ensure there is no risk.

“How the grain is grown, how it is harvested and stored to ensure there is no chance of contact is a lot more important than the value you put on a test of a small sample of grain.

“The testing of the product is just a verification that everything else is right. It’s not the be-all and end-all.”