You are at:Home»All News»FIFTY YEARS OF THE STANDARDISED BARCODE
September 27, 2021 All News

Visit any supermarket these days and you’ll be sure to hear the distinctive “beep, beep” of barcodes being scanned.

But what exactly is a barcode, where did they come from and where are they headed? NZ Food Technology News spoke to CEO of GS1 NZ, Dr Peter Stevens, to find out the history of this humble invention in its 50th year. 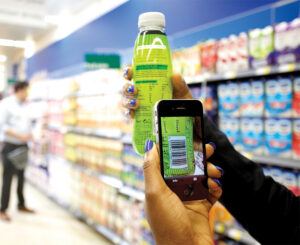 Perhaps not surprisingly, the food and grocery sector was the first to adopt scanner and barcode technology back in 1974, when it was first used to sell a pack of chewing gum in Ohio.

The fact that this gum is now housed in a Smithsonian Museum in Washington DC indicates the significance of this simple transaction.

Prior to this, in 1971, a group of supermarket competitors had gathered, and decided a new data system was needed. These business leaders quickly decided on the first standards and although the first bar code patent can be traced back to as early as 1952, the scanners and computers needed for this system were not available.

When the technology was finally available it took off, and 50 years later over two million companies in every country in the world identify their products with a standardised barcode – 8000 in New Zealand alone.

New Zealand retailers were quick to get on board this new technology and independent economist Brian Easton estimated that using barcodes in the supermarket sector alone saved over a $1 billion annually – improving the whole economy 0.5%.

Inevitably the use of barcodes spread to other sectors including beyond food and grocery into construction, health care, general merchandise and many more.

For consumers and retailers alike, the introduction of barcodes and scanning technology was transformative says Dr Stevens.

“Consumers had to agree that they could trust the supermarket because when they picked up a product at this point there was no price sticker. They had to believe they were going to be charged the same price they had seen on the shelf. Unions were concerned that people were going to be laid off and that robots were going to take over. Automated Data Capture was a huge idea at the time.”

It also allowed food retailers to track a first in first out system more carefully.

“In the food technology sector, there are a few areas where New Zealand is a little bit slow. We have an environment where Kiwi consumers largely trust our food and trust their producers, they largely trust our Government, the regulators and our retailers.

“New Zealand consumers don’t often question when they go to buy a food product, is this good for me? Where has it come from? Is it safe? Because generally the trust that we have has stopped us getting sick en mass, it’s stopped people getting food borne illnesses that have caused a lot of deaths in other countries and there hasn’t been the same sort of dodgy practices that in other economies have undermined trust by the consumer.

“In other parts of the world, you can clearly see that questions are being asked by consumers and often the retailers need to respond to that about those things. What is it, where has it come from, what’s in it?”

As for the future, COVID-19 and the next generation of digital tools are transforming the global economy again Dr Stevens says, with two trends are becoming very clear.

The first trend he believes is that product supply chains are going to be made more resilient.

“New Zealand retail stores had product outages through last year and shortages of items saw prices shoot up, in consequence of global shipping bottlenecks and delays, we saw ships queuing for access to Auckland Port at times, and the volume of containers handed at the border nationwide fell 7% in 2020.”

Business is also already increasingly shifting online and Dr Stevens believes this trend will only continue.

“NZ Post research showed a 30% jump in Kiwis’ online purchasing over the year to last August – and NZ Post expects that trend to continue with online grocery shopping in particular the “new normal” for much of the country,” he says.

Of course, these trends are only made possible with advances to digital technology with a focus on increasing computers ability to talk to one another enabling supply chain visibility and people using their smartphones to ask questions and get information at the point of sale and beyond.

“There are more people that have sensitivities around food, allergens, ingredients and for whatever reason it’s quite demonstrable that people are wanting to know more about their products. I would observe that our phones, that we all carry around, are a lot more powerful at the point of sale than anything that we would find at a supermarket. People now know that this is a way to ask questions. Now people are scanning a product and saying tell me more.”