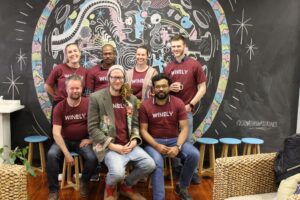 Award-winning biotech start-up Winely was established for one purpose, and one purpose only – to rid the world of bad wine.

Founded in 2017 by Jacob Manning and Abbe Hyde, the company began its mission give wine makers complete visualisation of the fermentation process.

Five years on, it’s safe to say the pair are well on their way to achieving this goal.

Winely’s biotechnology enables winemakers to see live data on their wine’s fermentation process. This means they can quickly make changes to the conditions to ensure the wine is fermenting in the way they want it to ferment.

This removes the need to manually retrieve and run lab samples in the primary fermentation and the information is provided to the wine maker via a cloud-based software.

The concept for Winely developed when Manning was doing some research at Otago University and heard about a project studying how different data points from wine relate to the end wine quality.

“We talked to probably 150 wine makers and we were really surprised early on how little information they had on such a sophisticated process,” he says.

“We examined it under the lens of biotechnology and we realised how different wine making was, in terms of fermentation. From there we have been working deeply with wine makers and technical wine makers for research across the globe.”

Hyde says Callaghan Innovation has been an integral part of their journey, assisting the team with the deep technology product development side of things.

“What we offer is the attributes that [wine makers]have to measure manually every single hour, every single day. We are able to monitor things in situ for them and each and every vintage we’re working with our research and development winery to create new sensors and algorithms so we can have more and more visualisation on that process.”

For some wine makers, part of the appeal is the mystery that surrounds the fermentation process, she says.

“If you’ve got a [food]recipe, you put in certain quantities, mix it and the same product comes out. The interesting thing with wine is, you do to an extent have a recipe – you’ve got some grapes and you want to make some wine – but everything that happens in between is a really complex biological and chemical process.

“There are all sorts of things happening in that fermentation process that we kind of understand but we’ve never had the ability to monitor it in real time.

“It’s quite fascinating. We see it as a bit of an emerging industry in a way. It’s becoming increasingly important to understand what’s going on at a biological and chemical level.”

She says they often get asked if they are trying to give people a recipe to make the same win every time.

“The truth is different grapes have different qualities. It’s not really about consistency, it’s about making sure that whatever you’re doing is optimizing that grapes journey,” Hyde says.

So is winemaking an art, a science or both?

“We always get asked; ‘Don’t winemakers have an instinctive way of knowing what they should be doing? Isn’t it just an art?’

“There is sensory analysis, which is very important, but no winemaker will make decisions without data. It is a scientific process.”

Manning says wine making is an art, “but its Da Vinci art, not Van Gough. Da Vinci was an engineer and obsessive with maths and science.”

At Winely, wine making occupies that interesting craft-like space somewhere in between art and science.