You are at:Home»All News»Logistics»Reliable conveying of abrasive granulates
September 12, 2012 Logistics 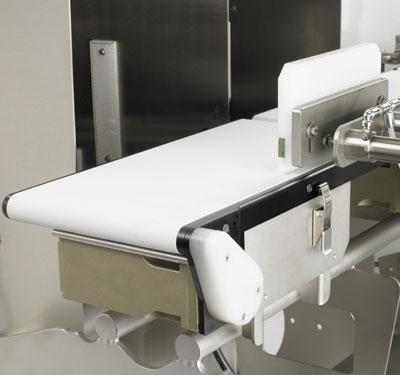 Manufacturers of fine granulates, crystals and powders no longer have to be plagued by the ingress of particles into production line machinery with the launch of Mettler-Toledo Garvens’ granulate conveyor for checkweighers.

Developed to reduce downtime and maintenance costs inherent with cleaning particle contamination, the new granulate conveyor features a unique covered design to protect moving parts. The conveyor is ideal for checkweighers used for all freeflowing granulate products, such as salt, sugar, washing powders and flour.

Granulate products can penetrate even the smallest gaps in machinery. During checkweighing, loose crystals can get under the transport belt of the conveyor, impairing its movement and changing the belt alignment, eventually causing so much damage that production must be stopped. With the granulate conveyor for Garvens checkweighers, all turning parts are protected by a special elastic transport belt which completely covers the conveyor body and acts as a seal.

The conveyor body is milled from a solid block, with no unnecessary gaps by which particles can enter. Also the toothed belt, located between the motor and drive roller, is fully enclosed to protect the drive system from abrasive or sticky particles.

“Downtime can be very costly to manufacturers as it has such a severe impact on productivity. By sealing and protecting the transport belt machinery, our granulate conveyor can save manufacturers time and money,” says Sascha Goly, product manager, Mettler-Toledo Garvens.

The conveyor’s elastic belt material does not require a tensioning device, making it quick and easy to replace, further reducing maintenance time. The granulate conveyor’s small roller diameter of only 25mm ensures the most stable and safe transport of granulate products, lowering the risk of product waste and increasing weighing accuracy.

Mettler-Toledo Garvens’ Granulate Conveyor easily integrates with existing Mettler-Toledo machines, so manufacturers do not have to invest in expensive new systems or lose production time during upgrade. It is available for Garvens checkweigher models XE/XS3, XE/XS3 H, XE/XS3 CC, and XE/XS3 CC H.

Granulate conveyors are applicable for products weighing up to 5000g and for a maximum conveyor speed of 60 metre/min.