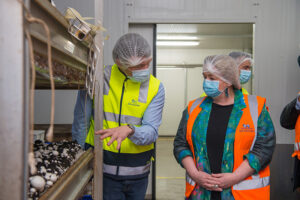 Meadow Mushrooms has been named as a successful recipient of the Government Investment in Decarbonising Industry Fund and will use this to replace their current diesel-fired boiler with a low carbon electric one.

This move will significantly reduce greenhouse gas emissions at the company’s main mushroom growing and packing site in Hornby, Christchurch.

Meadow Mushroom CEO, Todd Grave says the company is delighted to be able to make this change.

“Replacing diesel as a fuel source is critical to achieving our goal of decarbonisation. We recognised that moving to a cleaner energy source made good business sense. With this co-funding from EECA and the assistance of Meridian Energy and Orion Energy we will fast track our move to using electricity to lower the impact of our process on the environment.”

The boiler works to produce steam for the mushroom growing site. The steam cleans and sanitises the facilities and helps control mushroom diseases, avoiding using excessive pesticides and chemical sanitisers which are common in other mushroom growing setups.

Grave estimates a reduction in carbon emissions of 39,000 tCO2 over a 25-year lifespan for the new boiler which represents a 65% reduction in Meadow Mushrooms’ fossil fuel usage.

He also says that although electric boiler technology is well established, this project shows how this technology can be applied for medium to large-scale steam requirements.

Energy Efficiency and Conservation Authority CEO, Andrew Caseley says Meadow Mushrooms had already shown commitment towards carbon reduction, but this move has taken it to the next level.

“Meadow Mushrooms’ work to switch to a low carbon boiler to reduce their greenhouse gas emissions through clever energy management has set them up for success in this project. This shows what’s possible for the horticultural sector,” he says.

The company is the largest producer of fresh mushrooms in New Zealand with five sites and a team of nearly 500 people. They deliver over 9 million mushrooms a week to wholesalers, distributors, and retailers across the county and lead the industry.