You are at:Home»All News»AN AUTOMATION JOURNEY
January 18, 2021 All News, Processing 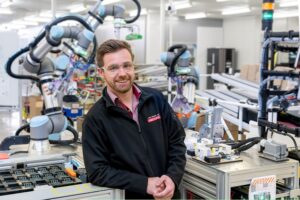 In five years’ time, the factory floor of Redarc Electronics is set to look very different – and it’s all thanks to cobots.

The electronic voltage converters manufacturing company is working towards being an entirely ‘smart factory’ by the year 2025. This means employees will be to focus on value-added tasks, leaving Universal Robot’s cobots to undertake manual and repetitive tasks.

In 2018, Redarc Electronics invested $22 million into a facility expansion project and is investing in research and development and the upskilling of its more than 200 employees.

According to Mitchell Adams, manufacturing engineering team leader for Redarc, the need to automate manual processes was motivation for this decision.

“We are always one step ahead and pride ourselves in ‘futureproofing’ our business. This robotic automation cell is a first for Redarc but is set to become the standard for further implementation as the company expands.

“To compete on an international level, we needed to increase the speed, quality and outputs on our assembly line – namely the assembly of PCB boards.

“Moving from manual to automated processes would increase our productivity and allow us to better compete in an aggressive market.”

“I first was introduced to Universal Robots at a previous employer and was impressed by their service levels. They demonstrated a cobot on-site which helped us to estimate the cycle time and rate of return prior to purchase.”

Two UR5’s and one UR10 collaborative robots (cobots) were selected based on Redarc’s needs.

Darrell Adams, head of Southeast Asia Oceania for Universal Robots says that cobots are well placed on the factory floor as they are fit for function and can work safely alongside humans.

The cobots are used in the assembly, labelling and transport of PCB boards. The cobot’s core tasks include the location of part and placement of a part in a jig feature, picking, assembly of the unit, presenting the unit to the labelling system where the movement of the cobot is used to apply a static label, loading and unloading of products for testing and picking up the product from the tester – here good and bad products are identified and sorted.

“As these goods are destined for export, it’s critical that only the best quality parts are sent. Here, cobots ensure quality, precision, and peace-of-mind for Redarc,” says Mitchell.

Mitchell says that the initial set up to perform bench testing with the 3D camera was trialled well ahead of commissioning.

“It was great to be able to do this to ensure the suitability of the product for such a complex project. The programming of the communication between the testing system and the cobot took a little longer. We had developed quite a complex robotic unit that needed to handle multiple tasks, all leading on from one another.” 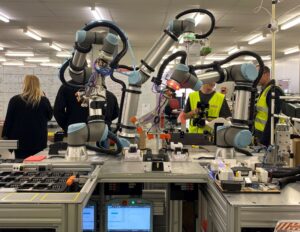 Mitchell says while operators were hesitant when the cobots were first introduced, they were pleased to know that a thorough risk assessment and various safety tests had been completed before they were introduced.

“This included using force control through the joints to demonstrate a staged safety test.”

‘Force mode’ is a collaborative automation element to highlight which allows the cobot to seek an object in a variable position.

“Due to variation in height when picking PCBs from a stack of Vacuum Form Trays they are not always at the same level, so it was impossible to program a cobot to stop at the same point on every cycle.

“Force mode allows the cobot to move down slowly towards a product until an opposing force is detected, compensating for this difference in height.”

With the introduction of these cobots, productivity has increased by 52 percent, and in addition the overall efficiency, quality and safety of the assembly on the line has also improved.

“We are always one step ahead and pride ourselves in ‘futureproofing’ our business. This robotic automation cell is a first for Redarc but is set to become the standard for further implementation as the company expands.”

Darrell says there has been an increase of cobots being used in Australia and New Zealand markets.

“Some of this can be attributed to the bigger drive towards automation and reshoring which we are currently seeing in the region. We are always excited to see collaborations with cobots such as these and look forward to seeing the Redarc journey to a smart factory in 2025 unfold and will be supporting them all the way!”