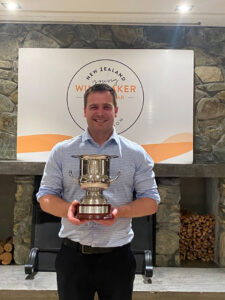 The Marlborough Young Winemaker of the Year title has been awarded to Peter Russell of Matua Wines for a second year running.

As the winner, Russell received a prize of $1000 cash, travel expenses to the national final, an Educational Trip with Fruitfed Supplies, and the opportunity to be an associate judge at the 2021 Marlborough Wine Show.

He will now focus on taking out the national title when he competes against finalists from Central Otago and the North Island at the National Final which will be held later in the year.

“I’ve received lots of messages from other contestants and members of the wine industry and I feel grateful to be part of such a supportive community,” says Russel.

Ruby McManaway from Yealands came second in the awards, followed by Alun Kilby from Marisco in third.

The winner of the National Final will take home a bespoke mini French oak barrel trophy, an overseas visit to Tonnellerie de Mercurey in Burgundy (when borders open) the opportunity to be an associate judge at the 2022 New World Wine Awards, cash and will review their favourite wines in DrinksBiz magazine.