You are at:Home»All News»Processing»RAPID SUCCESS – SCALING EQUIPMENT TO SUIT ANY BREWERY
October 21, 2020 Processing 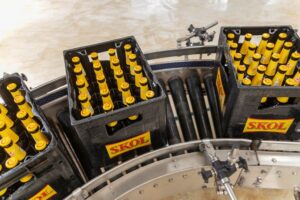 Skol’s brewery on the outskirts of Rwanda’s capital Kigali has only been operating since 2010. But the purely malt-based beer brewed there is being well received by consumers. So, when the existing bottling line had come up against the limits of its capacity in 2017, it was time for a new one.

Skol is one of the world’s biggest beer brands and is produced and sold by various brewing conglomerates.

Despite manufacturing for a much larger market, this Skol brewery is the ideal model to scale to New Zealand beverage manufacturers says Krones as the technology allows room for growth and can work for any sized operation.

“Our technology could be utilised or adapted to New Zealand brewery efficiently for any manufacturer scale. There are also the environmental advantages of returnable glass bottles for all beverages,” says a Krones spokesperson.

In some countries of Africa, the Belgian family firm Unibra owns the brewing and marketing rights. When the demand for beer in Rwanda rose a few years ago, Unibra decided to produce the purely malt-based beer locally too – and built a new brewing facility for the purpose: Skol Brewery Ltd. (SBL).

The decision itself, as well as the choice of what until then was an unknown type of beer in this country, turned out to be absolutely right: Skol Malt, the first beer ever on the Rwandan market to be brewed solely with malt, was a big hit, “although back then not a soul in Rwanda was familiar with the Skol brand,” says engineering manager at SBL, Eustache Mpiko.

Today it is SBL’s principal brand, accounting for around 60% of total sales. The second product the brewery produced right from the start – Gutanu, a beer made from malt and rice – has also caught on, and now represents a third of total output.

In following years, these were joined by alcohol-free, premium and specialty beers with a higher alcohol content. By 2018, Skol had thus succeeded in increasing its share of Rwanda’s beer market to 27%.

At first, Skol had dimensioned its fermentation and storage capacities cautiously, at 100,000 hectolitres. But because sales reached 80,000 hectolitres in the very first year, the brewery continually upsized its tank capacities. By 2017, sales had then risen to 400,000 hectolitres a year – and Skol was coming up against the limits of its bottling capacities, since the returnable-glass line installed (which includes some pre-owned machines from Krones) handles only 24,000 bottles per hour.

In order to meet the continuously rising demand, SBL had to invest in a second line. For this purpose, a new hall was built as a greenfield project, designed to house a complete new line from Krones.

Skol placed the order for the line with Krones in January 2018; installation began in September, and production started up in November.

“Opting for Krones was the right thing to do. After all, we already had long years of positive experience with Krones’ machines in the first line. So we also knew that Krones’ service people provide excellent support,” says Mpiko.

The beer bottles are packed solely in crates, though relatively small quantities for the export markets are also packed manually in cartons. The line’s particular highlights in Mpiko’s eyes include the Linapac II unpacker and packer, because they enable format change-overs to be performed fully automatically by entering a command at the touchscreen.

“This enables us to change over the entire line in 45 to at most 60 minutes,” he says. “Which means we’re achieving a line efficiency of more than 85%.”

For that reason, each Linapac II can select between five gripper heads for different bottle sizes. They are stored directly next to the pick-and-place packers. The line has been running right from the start in three shifts, manned by six operators at a time.

Skol’s biggest market is the capital Kigali, in which around two million of Rwanda’s twelve million people live. The beer is usually purchased by the consumers in individual bottles, and drunk in modestly sized sales outlets.

“Beer consumption in Rwanda is directly dependent on economic growth. This has been running at around 7% per annum in recent years and is expected to keep on rising. We have lots of young people, who in the near future will grow up to be potential beer consumers. If all goes well, we can start thinking about another Krones bottling line,” says Mpiko.