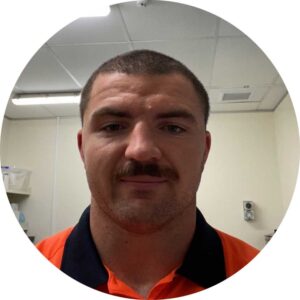 A chance conversation with a lecturer, while he was studying at Lincoln University, led Paddy to get in touch with Leaft Foods. It turned out he was a good fit for the company and he was hired shortly after.

HS: What/ where did you study and how did the job at Leaft come about?

PT: I recently finished studying my Bachelor of Science at Lincoln University at the end of 2021. I heard about Leaft through a lecturer I had for several papers. He told me all about Leaft and he put me in contact with Nicola from Leaft who ended up hiring me.

What is it about working in this industry that attracted you?

The fact that this is an innovative area for food products at the moment. There is a lot of other plant proteins, but Rubisco is relatively under-researched which makes working for Leaft exciting because you never know if a breakthrough is around the corner. I am also attracted to the sustainability side of this kind of work. The possibility of making a new sustainable plant protein is exciting.

In your opinion, what is the most pressing issue facing the industry right now and how do you see if affecting the future of food and beverage?

It may not be the most pressing right now, but I would have to say that shortage of resources and land with the world population increase would be one of the biggest ones. This will cause the food and beverage industry to adapt and cause farmers to adapt what they grow to be as efficient as possible to feed a growing population

What is a daily task that you are super passionate about?

It’s hard to narrow it down to one honestly, I am able to work with several different pieces of equipment and machinery at Leaft that has a good balance of working outdoors and in the lab. If I had to pick one it would be the final testing of protein percentages from different samples in the lab because this is where we get to see if all the work we’ve done from different trials has resulted in a better result.