You are at:Home»Sponsored»Pop A Robot
March 25, 2018 Sponsored 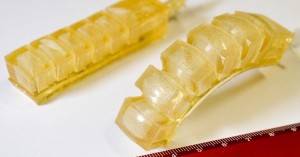 Imagine a world where you can eat a robot that will heal you or provide essential nutrients. It may sound like something dreamt up in a science fiction novel or Hollywood movie, but researchers from Switzerland’s École Polytechnique Fédérale de Lausanne are closing in on the creation of an ingestible robot that can perform a variety of functions from within the human body.

A prototype of a gelatin-based actuator has been presented to an international conference already, and the development team have warned that they will not be very tasty.

“Potential applications are disposable robots for exploration, digestible robots for medical purposes in humans and animals, and food transportation where the robot does not require additional payload because the robot is the food,” the Swiss scientists say.

The actuators will physically move around the body, will work with digestion and metabolism, and won’t be limited to just human use.

“Fully edible robots would help to study how wild animals collectively behave,” they say. “The robots could also take a role of animal’s prey to observe their hunting behaviours, or to train protected animals to do predation. Once medical components are mixed into the edible composition, the robots could help preservation of wild animals or heal inside of the human body.”