You are at:Home»Ingredients»Organic business is a family affair
November 22, 2012 Ingredients 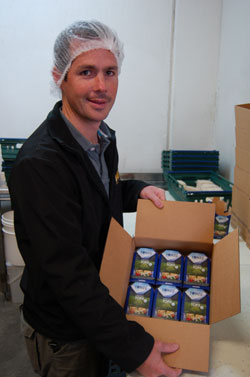 Tonzu is a family business with a not only for profit philosophy, producing organic soya products made according to traditional methods.

Since the 1970s the Chalmers family have been pioneers in organic food, beginning in Auckland and now across the whole country. Their range of organic soya products is sold throughout all supermarket chains in New Zealand, as well as health food stores, cafes and restaurants.

The story of the Chalmers’ various ventures and their attitudes and beliefs about food and food production is a reminder that business need not only be about the bottom line but also about enhancing human health and maintaining the health of the planet.

Stephen and Elizabeth (Lippy) Chalmers made the decision to branch out into what was then labelled as alternative foods in the 1970s, as a response to their son Daniel’s severe reaction to dairy products.

They founded Harvest Wholefoods, a store still going strong in West Lynn, but sold it to Elizabeth’s sister a few years later to concentrate on producing the tofu they had been making on the premises at Harvest.

Their new company, Harvest Soyfoods (later to become Bean Supreme) involved another family member, Stephen’s brother Greg, who had spent time in Japan and was inspired by macrobiotics. The Chalmers made fresh tofu that was delivered to various restaurants and cafes around Auckland, catering to the growing demand of customers seeking what was then, to Aucklanders at least, an exotic food that was difficult to obtain.

The Chalmers sold Bean Supreme and began a cleaning enterprise, giving them more time in the day to spend time with their children but were once again lured back into retail when they took over a wholefoods wholesale business in West Auckland. Naming it East West Organics, the Chalmers again found themselves making tofu in response to enquiries from their customers about high protein vegetarian food. 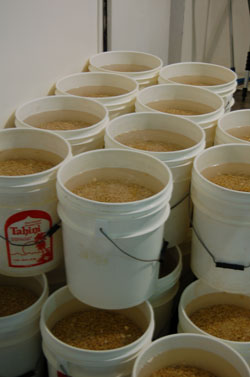 Purchasing a cooker and a grinder, Stephen and Elizabeth churned out organic fresh tofu at the back of East West Organics that was sold to customers at their store but soon realised there was a wider market for it. Supermarkets were beginning to stock organic products and the Chalmers began the Organic Soy Company in 1995, concentrating solely on producing organic tofu.

The company brand name changed to Tonzu in 2001 and since then has grown from a true Ma and Pa operation into very successful business creating this country’s only organically certified tofu.

Elizabeth retired last year from day to day side of the business but she still remains a director and after taking a few years out to study psychology, Stephen is back satisfying his desire to get out from behind a desk by doing the company’s deliveries.

Both of Stephen and Elizabeth’s children have been involved in their parents’ ventures in various guises throughout their lives and they have assumed more active involvement in the company. Daniel is general manager while daughter Jesse is responsible for costings and maintaining the books.

Daniel says their production facilities in Henderson produce tofu the traditional way – using organic whole soya beans that are soaked, ground, cooked and pressed to create soya milk, which is then separated into curds and whey using the traditional Japanese method of hand stirring. The only additive is Nigari – a natural by product of the sea alt making process. The result is an extremely versatile, medium firm style tofu. The fresh tofu is then vacuum packed without heat treating or pasteurisation, chilled, then sent to stores.

Tonzu’s range of soya products has grown over the last decade and they now make vegetarian sausages and mince, tempeh, and a plain and honey yoghurt. While they export small amounts to Hong Kong Daniel says the company is perfectly happy and far too busy with nationwide production to consider increasing overseas sales at this stage. Plus, as Daniel explains, Tonzu operates with a different bottom line.

“Our business is not only for profit. We have three priorities – people’s heath, the planet’s health and then profit.”

Organic business is a family affair