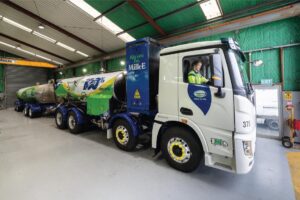 First, we met WALL-E (Waste Allocation Load Lifter Earth-Class), the lovable robot that filled our screens from the Hollywood blockbuster of the same name. Now, Fonterra has shown its own dedication to a sustainable future with the introduction of Milk-E, New Zealand’s first electric milk tanker – officially launched by the Minister for Energy and Resources, Hon. Dr Megan Woods, in Morrinsville.

Local Government, Iwi, Industry and Fonterra employees were also present to recognise the significant milestone in the decarbonisation of New Zealand’s heavy transport, while also recognising the team behind the build.

Named by Fonterra farmer Stephen Todd from Murchison, Milk-E is part of Fonterra’s fleet decarbonisation work, which is one of a number of programmes that’s helping the Co-op towards becoming a leader in sustainability.

“Right across the Co-op our teams are constantly looking at how we can decrease our emissions – from on farm, to at our sites and throughout our transport network,” says chief operating officer, Fraser Whineray.

The tank will be the same size as Fonterra’s regular tanker with the capacity to carry 28,000 litres. However, because the ‘truck’ part of the tanker is a bit heavier with the battery it will carry around 2,300 litres less.

“The team here at our Morrinsville Workshop have done a fantastic job of pulling this tanker together. Being a New Zealand first, there’s been a lot of creative thinking and Kiwi ingenuity to bring Milk-E to life.”

Changes to the battery configuration have given the team an opportunity to trial other additions to improve milk collection efficiencies, reduce safety concerns, and reduce the amount of work required to customise a Fonterra tanker. A battery swap system is being installed at the Waitoa site where Milk-E will be based to trial how this could work within a fleet to minimise downtime from battery charging.

Milk-E is about the same size as a regular tanker – it will operate at 46T GVM (gross vehicle mass) with the trailer and has a range of about 140km on a full charge.

Fonterra received co-funding from the Government’s Low Emissions Transport Fund (LEFT), which is administered by EECA (the Energy Efficiency and Conservation Authority).

EECA group manager investment and engagement, Nicki Sutherland, says, “We’re pleased to see this project come to life. New Zealand has ambitious targets to rapidly reduce carbon emissions, and transport is key, but heavy freight has proven hard to decarbonise. If successful, this project could be replicated across a number of New Zealand businesses.”

The electric milk tanker will operate out of Fonterra’s Waitoa site, which Mr Whineray says is very fitting given it was the site of New Zealand’s largest fleet of electric milk trucks 100 years ago.

Other work on Milk-E includes: