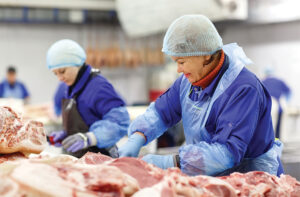 The New Zealand Red Meat Industry summary states that without the red meat industry, the country would face a cut of almost $12 billion in contribution to the GDP, the unemployment rate would double and there would be a fall in net central Government revenue from the loss of personal and corporate taxation revenue (plus increased expenditure on social welfare and health) of up to $1.6 billion.

Not only that, Beef and Lamb Ltd CEO, Sam McIvor, believes the red meat sector’s contribution goes well beyond economic, saying the industry’s contribution stretches to the social and environmental wellbeing of New Zealand as well as overseas.

“We’ve seen a drive back to meat and natural products internationally. People are thinking about their health and diet. Many people, particularly in Asia, have a very strong cultural relationship between meat and wellness,” he says.

“The other factor is an increase in home cooking. In our key markets, Europe and the US, we had a lot of products going into food service, but that market disappeared overnight [due to the pandemic]. So, companies have had to pivot towards retail, online, and the consumer.”

Despite, and perhaps due to the pandemic, global protein demand is higher than ever, and New Zealand’s positive food safety record will stand the meat industry in good stead for the future, McIvor says.

“Because we have done so well with COVID-19 there is that trust around safety and food safety [for products coming]out of New Zealand.

“We also produce the most natural meat in terms of it being free-range, grass-fed, with no antibiotics and no hormones. That sort of thing is appealing to the international consumer.

“Beyond that is the symbiotic relationship we have with nature. We really are the only place in the world where we integrate our sheep and cattle in our farming systems and secondly how we integrate our landscapes. Sheep and beef farms have about 24% of native bush that sits outside our national parks.”

Despite this, the most recent shift to level four lockdown nationwide saw butchers take a hit again as they were forced to either close or offer contactless delivery. On top of this, media reported that supermarkets were struggling to keep up with demand as customers turned to them for their meat supplies.

Beef and Lamb New Zealand Inc CEO, Kit Arkwright, said the government “missed a trick” when releasing the guidelines for butchers as only being able to offer contactless deliveries “wasn’t a viable option” for many, especially those in rural New Zealand.

“They still had to practice social distancing, so they were running with less staff. They were getting up early to prepare the orders, and then delivering the orders, meaning some were doing 15-hour days.”

Arkwright believed allowing butchers to open under level four with the necessary safety and hygiene protocols in place would take some of the pressure off supermarkets.

“Given Delta is a game-changer, large swathes of supermarkets were put into isolation because stores were becoming locations of interest. This put immense pressure on them, and we have got to congratulate those frontline staff once again for keeping the country going.”

Foodstuffs North Island chief executive Chris Quin told Newshub he supported the call from butchers to be able to operate under level four and rejected anecdotal reports of meat prices increasing during lockdown.

Arkwright says the reality is that independent butcheries, and greengrocers, could be operating safely and working to take the pressure off supermarkets.

“Let butchers do what they do best, serve the community, and do it safely as possible. It’s been a frustrating time because many people have recognised the role that butchers play and to date that has fallen on deaf ears with the Government.

“Anecdotally, supply hasn’t kept up with demand when meat is involved. That’s not a criticism of supermarkets, that is just the reality of what an alert level does to demand when you take out independent butchers and food services and channel it all through supermarkets.”

As for the role that meat will play in rebuilding New Zealand’s economy, it is already clear that it is significant.

Red meat exports (sheepmeat and beef only) generated $3.1 billion in revenue during the first four months of 2020.

McIvor is optimistic and says that this is the most united he’s seen the meat industry in a long time. He’s also excited to see the level of investment happening in brands, products, marketing, and processing technology.

“We are attracting some really outstanding people to our industry, both in leadership and in other areas of the industry so for me that gives me great heart.”

He also sees the industry as being well placed in terms of grappling with the challenges that come with climate change.

“Environmental issues are starting to become a significant purchasing driver for both international consumers and New Zealand consumers. We are absolutely fantastically placed in terms of our story and what we have achieved in the last 30 years to position ourselves for this,” he says.

“I think this is probably one of the most exciting times in our meat industry. Global demand for the unique system and protein attributes that we produce out of New Zealand has never been stronger.