You are at:Home»All News»MAJOR REVAMP FOR FOOD SAFETY LAW
April 29, 2022 All News, Dairy 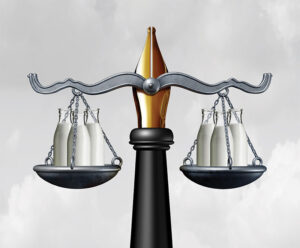 Following a government inquiry into a whey protein concentrate contaminant incident in 2013, it was decided that although the food safety regulatory requirements were fundamentally sound, they were repetitive, complex, and inaccessible.

As a result of this finding, MPI has worked to redesign the animal products and wine regulations to make it easier for businesses operating under Animal Products Act 1999 and Wine Act 2003 to find and comply with.

This process saw 1,300 pages of animal products and wine regulations simplified and consolidated including notices and supporting guidance documents.

The new regulations and notices come into effect on July 1, 2022 and operators of existing risk management programmes (RMPs) under the Animal Products Act will have until November 1, 2023 to update their RMPs to reflect new requirements.

Some readers might remember the high-profile incident that sparked the inquiry that led to this move. In 2013, there was a large-scale recall for all products sold by Fonterra after a botulism causing bacteria was found during routine safety tests.

The whey products were sold to manufacturers who used the ingredient to make infant formula and sports drinks.

Thankfully there were no reported cases of illness, and it was later found that the bacteria were not a botulism-causing strain, however China placed a temporary ban on the import of whey from New Zealand.

In an effort to ensure an incident like this never happens again, New Zealand Food Safety has been worked to revamp the animal products and wine regulations to make it easier for businesses operating under Animal Products Act 1999 and Wine Act 2003 to find and comply with.

This has been achieved by consolidating and removing duplication, enhancing accessibility, and making the language easier to understand.

“The changes include the consolidation of three animal products regulations which have been replaced by the new Animal Products Regulations 2021.

“Six wine notices have been replaced by three notices and stronger food traceability and recall requirements have been incorporated into the new animal products and wine regulations.

The new Animal Products Notice: Production, Supply and Processing was published on March 1, 2022, which applies to producers, suppliers and processors of animal products such as dairy, fish, poultry, meat and honey, and people who transport and store these products. It is also relevant to verifiers and evaluators of these businesses, and any associated accreditation bodies.