You are at:Home»All News»Export»John Palmer awarded for getting kiwifruit industry through hard times
November 27, 2013 Export

John Palmer awarded for getting kiwifruit industry through hard times 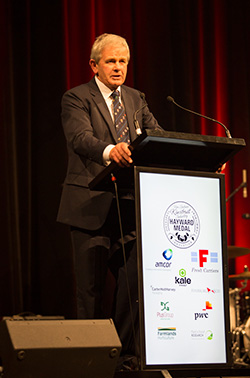 Former chairman of the New Zealand Kiwifruit Marketing Board, John Palmer, was awarded the 2013 Fresh Carriers Hayward Medal for his tireless efforts to bring the kiwifruit industry through the fiscal crisis in the early 1990’s this month.

Zespri chairman Peter McBride announced Mr Palmer as this year’s recipient of the kiwifruit industry award at the Hayward Medal Dinner in front of more than 450 people in Mount Maunganui.

“The kiwifruit industry is facing a huge challenge in form of Psa now but we faced a disaster of equal proportions back in early 1990’s. The financial disaster in 1992 saw the bottom drop out of the market, as prices crashed in an over-supplied European market,” says Mr McBride.

“Industry debt ballooned to more than $100 million, European coolstores were owed millions and there was no bailout from the Government – so growers had to help themselves. Many were bankrupted or had to find other income; around one in four growers were forced off their orchards.

“It was John Palmer, a kiwifruit grower from Nelson and Board member, who stepped up assume the chairmanship of the New Zealand Kiwifruit Marketing Board – surely one of the least desirable positions in the country at the time. Seemingly undaunted, John worked day and night throughout the financial crisis, to trade through the 1993 season,” says Mr McBride.

Mr Palmer persisted with packaging partners and they – along with the National Bank – eventually agreed to fund the 1993 season and gave the industry its hope for survival. Thanks to Mr Palmer’s leadership and tireless efforts, the debt was cleared and the industry stabilised two years later.

“John is a brilliant thinker and leader. He showed outstanding leadership when the industry’s future and global credibility was shredded – directly contributing to what became one of the greatest business turn-arounds New Zealand has seen.

“His five years as chairman of the Kiwifruit Marketing Board helped establish our industry for the future,” says Mr McBride.

John Palmer awarded for getting kiwifruit industry through hard times