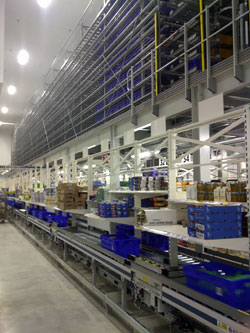 Dematic has provided Tesco with an automated materials picking and handling system for the retailer’s 120,000 square foot grocery fulfilment centre located in Enfield, UK. It went live in January 2012 with the system enabling Tesco to fulfil an increased amount of customer orders from one location for their grocery home delivery business.

The Enfield centre is Tesco’s fourth ‘Dotcom store’, which is effectively a warehouse dedicated to delivering orders placed online to customers’ homes. The Dotcom stores replace Tesco’s previous operation in some particularly busy areas where employees pick online orders straight from the shelves of its retail stores. Tesco has transferred picking and delivery of online orders from several of its normal stores into the Enfield dotcom store.

The fifth Tesco Dotcom facility delivered by Dematic will go live in early 2013 in Crawley. Building of a sixth has started, which will incorporate further automation technologies from Dematic.

Tesco staff pick grocery, produce and bakery goods into the order totes according to instructions received via wrist mounted radio data terminals. Once scanned, totes are sent to the next relevant zone via conveyor. Complete totes are then routed to the Multishuttle consolidation buffers.

Two separate Dematic Multishuttle Consolidation Buffer units hold completed customer order totes for both ambient and chilled home delivery orders. Once a full van has been consolidated, the totes are sent in order sequence to one of the centre’s van loading bays for operators to load.

All of the integrated system’s operations are controlled by the Dematic Warehouse Management System and Dematic also carry out the order slotting for all of the products in all of the zones.

“With each of our stores we aim to move forward the model in terms of accuracy and quality for the customers as well as productivity for Tesco,” says Tesco’s operations development manager, David Burroughs.

“Having gone out to tender for mechanisation suppliers, we picked Dematic because we felt their system would enable us to achieve our objectives of faster picking, and greater accuracy and reliability enabling us to give our customers excellent standards of service whilst still providing a profitable model for Tesco. This system will help us reduce our running costs and offer more delivery slots to customers from earlier in the day. We wanted to ensure we could get customers’ orders picked, vans loaded and out on time with the freshest possible produce. The system also gives the accuracy we need to ensure the highest possible service levels,” he says.

Tesco was particularly keen on Dematic’s Multishuttle according to Mr Burroughs.

“Dematic’s Multishuttle offers a number of advantages over similar systems, particularly its speed for loading our vans and its ability to swap individual shuttles, which gives us a tremendous advantage in avoiding downtime. Furthermore, the height of the Multishuttle enables us to make good use of space that would otherwise be dead air space in the warehouse, to minimise its footprint,” Mr Burroughs says.

Dematic’s sales project manager Shane Faulkner says that Dematic’s complete system enables Tesco to pick and deliver within the concentrated floor space of the single Enfield Dotcom store, which removes dotcom pickers in many of the surrounding Tesco stores.

“This is an advantage in areas where rents are high. Also by automating its online order picking process, Tesco can increase volumes while at the same time maintaining the high service levels that are essential with home delivery.”