Southern Fresh Foods operations manager Peter Walker had an issue. Business was booming for the Hautapu-based company located in a picturesque rural setting close to Hamilton, but it was clear automation was needed in order to stay ahead of demand.

The company, which grows and sells baby leaf salad ingredients – such as rocket, spinach and mesculin – along with small vegetables and herbs to the higher-end food service industry, was working overtime to package up leafy salad materials in 1kg and 3kg bags, and the task was very labour intensive.

Walker knew the 12 or so workers toiling five days a week to hand pack were not sustainable and making sure each package was accurately weighed was also a challenge during production at the 17-year-old plant located on 227ha and employing more than 80 staff. “We knew we had to reduce labour and get consistency in the packaging,” Walker remembers. “We needed the packaging to be better-looking and professional. Salad vegetables such as baby leaf are very hard products to pack and control. Delivery is also time critical, so we knew that what we needed was pretty complicated.”

Before doing anything else, Walker did some research on the different companies that could build and supply the automation. Timing was crucial, as the baby leaf product has a 10-to-11 day ‘best by’ window, and technology was needed to suit the modified atmosphere of the plant – down to freezing – and be able to print date of packaging and ‘best before’ details, reduce spoilage and increase throughput.

That was where Wedderburn came in. Walker had some knowledge of the company through businesses he’d seen the company complete in Australia, and he also knew the company had representatives in Hamilton and technicians available at all times. Wedderburn managing director Vernon Herbert takes up the story.

“Pricing, options, specifications, floor space and drawings – that all took time but we needed to analyse conditions that the machinery would be working in,” he says. “It is cold and air conditioned, but we overcame any hurdle and started the process of building what Southern Fresh Foods needed.” What they needed was a Paxiom PrimoCombi 5L multi head weigher and XPdius 1700 vertical form fill seal, a set of equipment that could weigh, wrap and label baby leaves using just three employees over the five days of operation each week. Producing 30 bags per minute, the equipment uses conveyors to move the produce up to a central weighing platform 14-head combination scale to ensure accurate weighing.

Cleaning is made easy with tool-less pans, buckets, chutes and forming shoulders, all designed for quick and easy removal. The PrimoCombi uses Windows-based operating software, and has an open frame design to enable simple and easy-to-operate, wash and service. Product change-over is simple and quick which helps increase productive hours per day. Wedderburn, in partnership with Paxiom Shanghai, offers remote diagnostics, trouble-shooting and on-site technical support when needed. 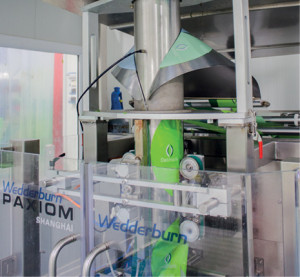 Wedderburn also supplied Southern Fresh Foods with a Thermal Transfer printer which prints all the necessary information required – such as batch numbers, dates and barcodes. This printer was mounted to the XPdius Vertical Form Fill & Seal Machine (VFFS), which allows Southern Fresh Foods to use clear and generic pre-printed film in the VFFS machine and still get all the information printed on the bags that they need.

Herbert says Wedderburn, in partnership with Canadian company Paxiom and using their state-of-the-art Shanghai manufacturing facility, manufactured the complete system to the highest quality. To save cost and time, Wedderburn arranged a Skype meeting to conduct FAT (factory acceptance testing). “This meant the equipment was fully assembled in a factory in China and tested in front of us to ensure it worked as we wanted it to,” he says.

“It was quite an enjoyable exercise, as the Paxiom factory manager in Shanghai rushed between components with her laptop in hand showing Southern Fresh Foods and us all the different facets. It is an important part of the process, however, and very informative. Everyone’s time is precious, and going over there to have a look would have been time-consuming and costly. We are very aware of that.”

The machine was then crated from China in two shipping containers, along with a technician with excellent English skills who helped with installation, taking just one-and-a-half days. Walker says his company is very pleased with the end result, which has seen the successful automation of a difficult task. Fresh produce is weighed, bagged and batched at impressive speeds.

“To say it’s been successful is an understatement,” he says. “In every aspect, our production is streamlined and we can handle an increase in production if we need to. This has been a very successful decision for Southern Fresh Foods.”

Herbert says Wedderburn prides itself on its support, particularly with modern machinery such as that at Southern Fresh Foods. “In my opinion Wedderburn has the best service support and nationwide infrastructure to support our customers with their needs. We care about our customers and their businesses. It’s as simple as that.”