When PepsiCo was first released by distributor Frucor into New Zealand in 2009 using a new range of 300ml bottles called the ‘Carolina’, Coca-Cola objected to its shape and contour as too close to its own trade marked bottle. 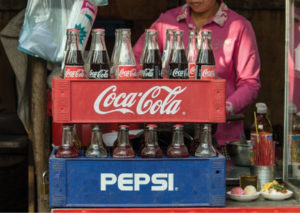 The Carolina was the subject, at the time, of uncontested design registration in various countries, although such protection was not sought in New Zealand.

From 1995, in order to be TRIPs compliant, the Trade Marks Amendment Act 1994 widened the definition of what could constitute a trade mark.

While not specifically including shape marks, the Intellectual Property Office of New Zealand subsequently allowed shape marks to be registered.

The presiding judge agreed with Coca-Cola’s submission that for shape registrations to have meaning, they cannot be circumvented by another trader adding a brand name, colour or other distinctive feature to the same or similar shape.

The Carolina bottle shape on its own qualifies as a sign used in the course of trade, and the judge said PepsiCo’s and Frucor’s use of that sign was likely to be taken as use of a trade mark. However, when comparing the Carolina bottle with the registrations for the contour bottle, the judge said they were not sufficiently similar to establish infringement – in fact, only one of the five distinctive features portrayed in the Coca-Cola contour bottle registrations had been used in the Carolina.

The bottle’s embossed horizontal wave pattern further distinguished it from the contour bottle.

The judge also noted that despite Coca-Cola’s domination of the market, no evidence of confusion was available and it was unlikely that any such confusion would remain undetected.

Coca-Cola’s passing off and breach of the Fair Trading Act actions likewise failed due to lack of similarity and lack of confusion.